* Same weight across; focus on technique

Gigay, Rhona, and I shared a bar for the clean pulls and the three of us used the same weight. Oh, and the metcon sucked. Or rather, I sucked at the metcon.

Sep 27 WOD: Jerks all around

I have been away for much too long (even though it was only 2 days)!

I think I've gotten the hang of box jumps. Like I know that when I'm tired it helps if I do big arm swings. Also I like to keep a certain rhythm when I can.

So Greg invented a new term today. He was trying to say, "squat snatch" and what he said was "squatch."

12 minutes to establish a heavy complex of:
1 squat snatch + 1 wide grip push press (from the back) + overhead squat

Then, 5 minutes EMOM:
1 complex at 80% of previous heavy complex

I really need to work on my bottom position! Coach Jordan said we should focus more on skill now and not so much on hitting heavy weights. I agree!

A deck squat is like a candlestick roll but instead of using one leg to stand up you use both legs. I got a butt rash from this workout. Boo.

Then: Every 90 seconds x 3 sets:
1 complex at 80% of heaviest weight used in previous exercise

First workout after the throwdown so I allowed myself to take it easy. The stress of the throwdown is still vivid in my mind so I just wanted to workout without thinking if I should try going Rx. We told Coach Jordan that we were declaring a "petiks" month, and he said, why a whole month?? Why not? My original goal when I started CrossFit was simply to get fit. Now that I have gotten reasonably fit, should  aim to get strong? And if I do aim to get strong, at what point should I stop? Hmm. Post-throwdown thoughts to ponder.

What. A. Weekend. After months of preparing for the throwdown (though it was more of a mental than a physical preparation, I admit), it finally took place during the weekend.

I teamed with Jerwin and Ian, and we joined the medium Rx division where the weights and movements were more manageable.


It was a two-day throwdown, and the format is there are 3 workouts on Day 1. There will be a cut and organizers then announce which teams will advance to Day 2 where athletes need to do 4 workouts.

I was dreading this workout because I'm not DU-proficient yet. It was a relay workout. That means Person 1 does the DUs and as soon as he's finished he does the 2 sprints. The first sprint is until the half of the WOD area, where the athlete grabs a can of Ion Energy Drink and puts it into the box where his teammate is doing DUs. The second sprint is all the way to the other end of the WOD area, and again the athlete grabs a can and puts it into the box. Meanwhile, Person 2 can start with his DUs even while Person 1 is sprinting. Same goes with the transition between Person 2 and Person 3. I was Person 3 here because I didn't want to go first. I think we got a total of 34 cans.

Ian started with the KBS while Jerwin waited to do box jumps and I waited to do dead lifts. I'm happy about this WOD because I was able to string 4 knees to triceps! 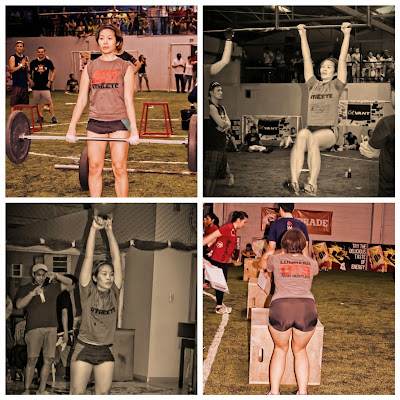 This workout was still a relay but team members can choose who will do which movement -- thank God, because my pull ups still aren't worth a damn. Our team's strategy was I'd be the one to row, and Ian and Jerwin will take turns with the thrusters and pull ups. I averaged around 1:15 for the 300 meters, but by the last round I had to really dig deep. I heard people shouting my name and encouraging me but all I could think about was finishing, and finishing fast because I didn't want to let my teammates down. Good thing this was the last workout of the day because my legs were dead.

Even before the throwdown my teammates and I had agreed that we'd shoot for Day 2 but we didn't really have a strategy for the Day 2 workouts. So when we found out that we were in there was a little bit of panicking.

We were all so chipper when we arrived but our good mood was replaced by the jitters again when we found out we were in the very first heat of the day.

This workout was only for the boys. The girls had another workout which they had to do simultaneously.

This was the one I had to do. Originally, it was supposed to be a 2000-meter row, and Rhona, Helen, and I were already dreading it. Good thing it was announced that they were changing the time cap from the original 15 minutes to 10 minutes, and they were shortening the row to 800 meters.

And that was the end of it. We didn't make the cut to WODs 3 and 4 but our team finished 12th out of 36 teams and that's not bad at all! I was just so glad it was over and that I could finally get on with my life. The next day, though, I kept thinking, What now??

The throwdown is 2 days away and I'm totally consumed by it. I'm just glad that I'm doing it with friends. Otherwise, I'd probably psych myself out and chicken out. I shall just look forward to our beach trip post-throwdown. That should be good.

I hadn't done the snatch in a while so I wasn't really looking forward to the workout. It was still good though, and I even got a power snatch PR at 70#.

I still have a lingering cold, which gave me a runny nose and made it awkward and annoying to be sniffling all the darn time while working out. And I DNFed again. Boo.

Anyway, the throwdown is just a week away. I received an email about the WODs and the heat schedules yesterday. All this time I'd succeeded in not thinking about it, but as I was reading all the information in the email I realized, sh*t just got real. And this morning before the WOD people were talking about strategies while I was panicking and fretting. I was texting with my teammate Jerwin yesterday and he was so confident that we could win this. Of course, I'll do my best but I also just want to have fun.

I just keep reminding myself that this will all be over on the 16th. Also, there's an after party on Sunday. Eyes on the prize.

Rache, Rhona, and I shared a bar and rack for the front squats. For the metcon I let myself get needled into doing a heavier weight (what's new?). Didn't regret it though. I'm thinking maybe I should've gone a bit heavier, even.

I haven't worked out since Thursday last week because I got sick on Friday. Sick as in I-had-a-fever sick. And it's been such a long time since I've had a fever I've forgotten how utterly terrible it is to be sick. I was already well yesterday but I still didn't work out just to be sure I'm okay. Although I was still feeling very heavy and lazy this morning, I managed to get myself ready.