Before leaving for a lunch date this morning, I packed my gym stuff because I was planning to go to the last class at the box. After having eaten too much and consequently feeling bloated however, I was hesitating about working out. But when the lunch group broke up at around 2:45, I took it as a sign that I had to go to the box.

When I got there, the coach divided us into 2 groups -- probably because there were too many of us -- and he put me in the easier group. I say easier because the other group's WOD included 2 2-mile runs, squat cleans, and box jumps (gulp!). My group had to do 20 mins AMRAP of:

For the toes to bar, I again did leg raises; for the push presses, I initially used the 35 lb bar, but the coach saw me struggling after the second set so he gave me the 25 lb bar.

I was able to complete 4 rounds and made it up to the 9 pull ups of the 5th round. I felt good about it but my hands sure didn't.
I'm starting to learn that calluses, bruises, and even wounds come with CrossFit territory. My knees have semi-perpetual bruises because of the lunges and push ups we do, and I still have scratches on my shins because of the dead lifts we did some days ago. Battle scars is what they are.
Posted by Aya at 7:24 PM No comments:

I did modified versions of all but the wall balls. For the hand stand push ups, I did them kneeling on a box with my head upside down. For the chest to bar pull ups, I used the rings again. And for the toes to bar I did leg raises instead.

But I sucked at wall balls the most. You're supposed to hold the ball with two hands, squat, then launch the ball and hit the red line on the wall. Then you catch it with your two hands and squat again in one fluid motion, and repeat. I used the 7 kg medicine ball, and for the life of me I could never hit the red line on the wall! I generally don't like balls, especially ones that look like they're going to hit you.

I did 4 rounds and made it up to 5 wall ball shots.

Tomorrow (or maybe the day after tomorrow) is another day!
Posted by Aya at 3:47 PM No comments:

I'd been gluttonously gorging on almost everything I see on the dining table the past couple of days and that made me dread going to the box today. I was expecting a benchmark WOD since CFMNL posted that Libis will be doing "Jumbo Jackie" today. But when I got there we did a running WOD instead. I think it's because the floor was newly painted that's why we had to do the WOD outdoors.

Today was 15 mins AMRAP of:

The kettlebell press is supposed to be done using one arm but I did a variation using my 2 hands and a 12 kg kettlebell. For the tuck jumps, I couldn't do it right so I just did squat jumps. And even then the coach kept shouting at me, "Squat lower!" Ah, well. I was able to do 3.5 rounds.

From the box, I went to dinner with high school friends plus Neil. We had some good laughs talking about our memories of Tin. Neil took it upon himself to give Christmas gifts to Tin's godchildren, and it makes me want to cry. We miss her. The priest at her funeral mass hit the nail on the head when he said, "We are sad because we know that nobody will love us the way Tintin did."
Posted by Aya at 1:11 AM No comments:

Today's WOD was more challenging than usual. Karen said it's because they won't be seeing us for a couple of days because of the Christmas holiday! Punishing us in advance because they know we're going to stuff our faces this weekend?

Only two people went to the 10 am class today, myself included. A lot of people seem to be getting busier preparing for Christmas. I myself can't wait for this work week to enddd.

Anyway, we worked on strength today. We did 6x3 (or was it 5? I can't remember now) front squats, starting light then working our way up. I maxed out at 75 lbs, and good thing we didn't have to clean the bar. Instead we used those things you place the bar on and you take the bar from a standing position.

Cash out was 10 mins AMRAP of:

Miggy was there and he asked if I've been running better. I had to tell him that I haven't run since I started going to CrossFit, mainly because my muscles are too sore and stiff the day after a workout. But he said I should test it and maybe I will, this Christmas vacation.

CrossFit IS addictive. Something I read on tumblr said it right: Every workout makes you feel like you're dying, but at the end of the WOD you don't die so you want to go back to see if you don't die again -- and maybe do a little better than you did the last time.

In other news, I think it's time to look around for a new pair of crosstraining shoes.
Posted by Aya at 12:12 PM No comments:

This is the first time for me to do a weekend WOD and I almost regretted it. Almost. Warm up included an 800m run, wall-facing squats, squat jumps, and push ups... which felt like a WOD in itself.

The WOD itself was 15 minutes AMRAP of:

Initially, the row was supposed to be 200m, but I guess the coach thought it would take up too much time since there were only 3 machines vs. about 10 people. For the front squats I used the 35 lb bar again (maybe I need to upgrade to 45 lbs next time?). The hardest was the lateral jumps. It sounds so simple: jump over a parallette from side-to-side. But it's not so easy to do when your legs are already burning from the front squats.

Good: I was the only one who attended the 10 am class and I had the box all to myself.

Bad: I was the only one who attended the 10 am class and I had the coach breathing down my neck for the entire duration of the workout.

My time: 21:44. Pfft. When I looked at the mirror after the workout, I remembered this: 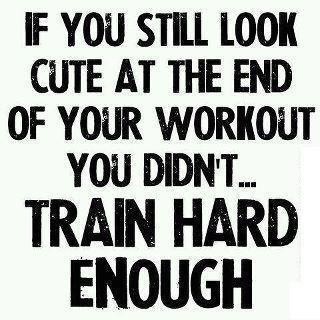 Because I definitely did not look cute. Great way to kick off the weekend, though!
Posted by Aya at 12:10 PM No comments:

Before the WOD, we had to do 30 reps of 10-second "hollow body" holds. Basically, you lie on the floor and push your lower back down on the floor, and your legs and shoulders should be raised off the floor. The exercise is supposed to teach you to tighten your abs and glutes, which you're supposed to do when lifting weights so you won't injure your back.

I used the 25-lb bar for the overhead holds and good mornings, but after the workout I realized I could've gone with the 35-lb bar. And I can't do double unders (yet!) so I did the 60.

I wasn't able to workout last Friday because I was sick. It was just a sore throat but I felt really bad, and I even had to miss work. And then yesterday I was on mommy-mode because my son's 3rd quarter exams are coming up and I wanted to review with him. Anyway, enough of the excuses.

We were given 15 minutes to do the 6 rounds and I finished in 13+ minutes.

I like going to the 10 am class because there are usually only 3 or 4 of us there and there's less pressure to do as well as the other "hardcore" crossfitters. I wish they'd have a 10 am class everyday, though, so I can maximize my membership fee.
Posted by Aya at 11:36 AM No comments: Links to this post

I was already sweating like anything after the warm up because it included 200 jump rope and 2x5 sets dead lifts (among other things).

Today we did 20 minutes AMRAP (as many rounds as possible):

I was able to do 7 rounds and had started the 8th until the dead lifts. Hello, wobbly knees!

In other news, I feel like my tummy flab has gotten a wee bit smaller. If I can only pair good diet with crossfit that would be perfect.
Posted by Aya at 2:20 PM No comments:

I just realized that this blog is turning out to be more of a workout diary.

I guess it was good timing (?) that we had squat cleans because I'd just done Foundations Class last Sunday, so I was able to practice what I'd learned (??). Except that I always got berated by the coach for not having the correct form and not going low enough for the squat. But what can I do if my coordination sucks? I probably shouldn't overthink the steps to follow when executing a squat clean because I kinda do it in slow motion -- I count the steps in my head like when learning a dance step. And the coach says it has to be more explosive.

Now I know what my students must feel like when they have difficulty grasping a grammar point.

We did Collin today, which was 6 rounds of the following (with a 45-minute cap):

I think it was at the start of the 5th round when I started feeling light-headed but I chugged along and it eventually passed. And once, while doing the carry the coach shouted, "Laya! Stop daydreaming!" I would have laughed if I weren't so winded.

When I started the 6th round around 40 minutes had already passed, and I was thinking that I will DNF (did not finish) again. But no. When I came in the others were still at it even though the 45 minutes had already elapsed, and I felt a sense of dread as I mentally prepped myself to push through. I finished with a time of 48:48.

Oh, and I finally signed up, too! I'm having my first Foundations Class this Sunday. As Mo Twister would say: Good times.
Posted by Aya at 1:20 AM No comments: